Reposted from Architecture Here and There 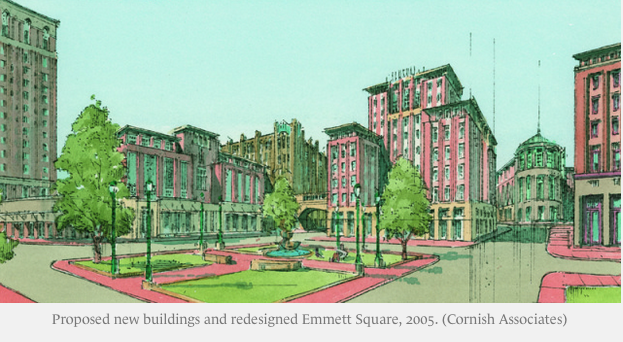 When it was announced several years ago that Providence developer Buff Chace would purchase the Journal Building and the parking lot across from it on Fountain Street, he expressed the hope of erecting a new building on the latter site. Now Chace has in fact announced a six-story residential project with a grocery store on the first floor facing Washington Street and a restaurant facing Fountain. Good news!

Here’s the Journal’s Saturday story: “6-story building proposed for downtown parking lot.” Mark Reynolds’s article ran without any illustrations of the proposal – perhaps there are none yet – but a couple of quotes inspire hope that the building, if built, will add to the character of downtown.

Chace says he intends his first effort at an entirely new building will be “a modern building that is harmonious with the downtown historic fabric.” For those who see some unwanted backsliding in the word “modern,” any new building that has plumbing and other such advanced systems is a “modern” building, no matter what it looks like. I don’t think he meant “modernist.” Anyway, zoning requires the design of new buildings in downtown to protect its historical character. Nobody expects it to be made of marble. “It has to be affordable, too,” he says, “Otherwise it doesn’t happen.” So, he says, it will be a brick building. Good.

Chace told Reynolds that this will be “the first time that he has built a building from scratch in downtown.” Not his first attempt, though. A decade or so ago he hoped to build a new building, elegantly classical, across Union Street from his Alice Building on what is now called the Grant’s Block, where he hosts free movies weekly in the warmer months. He showed me a picture, which I could not find in my files, and it was lovely. But while looking for it I came across an earlier proposal from a version of the Downcity Plan (led by Chace and his friend Andrés Duany, the New Urbanist guru) for a couple of new buildings, traditional in style, on the Grant’s Block, which is the illustration at the bottom this post.

Later, Chace and Duany imagined, in 2004 or ’05, as part of a charrette to expand the Downcity Plan, placing a new building on the Journal’s other lot on Fountain, behind the Biltmore Garage, and a second new building that would have replaced the Journal’s executive garage (the green snubnose eyesore) and the modernist addition above it with a hotel (I think) facing a renovated Emmett Square off Kennedy Plaza. An illustration of that proposal is at the top of this post.

Pardon me while I roll my eyes. Howard Sutton, who was then the Journal’s publisher, went nutso at the audacity of someone even thinking of (let alone actually drawing!) fictional buildings on land they did not own. What a baby! It diminished Sutton in my eyes – after all his vaunted editorializing in favor of revitalizing the city.

Good grief! So it’s time something was built on that old parking lot, which I know so well. I recall the Journal demolishing several buildings on it back in the 1980s, I think. Likewise on the block behind the Biltmore Garage. These are mistakes that merit correction, and I am pleased that Buff Chace has proposed to make a start in that direction. Good on him!