The Lapham, Wit, and Trayne Buildings will join the 8 other buildings that make up Westminster Lofts 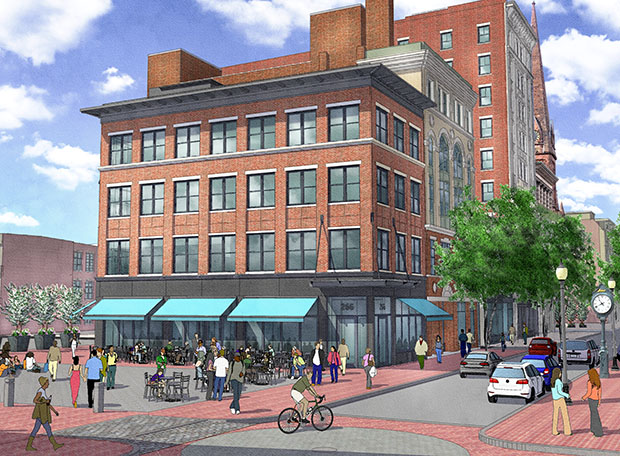 Cornish Associates’ Westminster Lofts, a collection of award-winning, magnificently restored historic buildings are comprised of 240 residential apartments and 98,000 square feet of retail, restaurant, and office space. The Westminster Lofts include the Peerless Building, the Smith Building, the Burgess-O’Gorman Building, the Wilkinson Building, the Alice Building, and the Kinsley Building all located in the historic Downcity District of Providence. We have redeveloped the Harkness Building and the Biltmore Garage and are co-owners with Burlington, Mass. based Nordblom Company of the Gardner Building and 75 Fountain Street, both office buildings, located in downtown Providence.

Renovations to the historic Lapham Building, Wit Building, and Trayne Building will add 52 apartments to Westminster Lofts, 6 ground-floor restaurant/retail spaces totaling 11,771 square feet, and 8,956 square feet of office space to the second floor of the combined Lapham and Wit Buildings.

The Lapham Building, located at 290 Westminster Street and wrapping around the neighboring Tilden-Thurber Building to 158 Mathewson Street, was designed by Hoppin & Ely Architects and built for the heirs of Benjamin Lapham in 1904. The building originally was home to the Mutual Benefit Insurance Company and has had various office tenants throughout the years. The building has been largely vacant since the late 1990’s.

Adjacent to the Lapham Building to the east is the 2-story Wit Building. Located at 276 Westminster Street, the Wit Building was built by the I. Wit Realty Co. sometime in the mid-1930’s. The building’s longest tenant was Jean’s Department store, which existed from 1933 to 1979. In later years the building was home to the Black Repertory Threatre, Roots Cafe, and most recently Aurora.

Lapham & Wit will be combined into one building with the second floors connected to provide 9,000 square feet of flexible commercial office space. The ground floors will be built with space for up to 4 restaurant or retail tenants. Floors 3 through 9 of the Lapham Building will be renovated into 35 one and two-bedroom apartments.

The Trayne building is located at 270 Westminster Street and is best known locally as the building where the Movies on the Block screen is located. The building was constructed for Alice and Elizabeth Trayne and Anne Hale, as an investment property for the three women and their heirs. In 1953 the Old Colony-Newport National Bank moved into the building performing a large renovation which removed the original two-floors of the front facade.

The renovation of the Trayne Building will include an addition to the east side of the building, extending approximately 20 feet into Grant’s Block Park. The existing building and addition will include two restaurant spaces on the ground floor (one opening up onto a redesigned Grant’s Block Park) and 17 apartments on floors 2 through 5.

In addition to the Lapham, Wit, and Trayne Buildings, Cornish Associates is renovating two smaller buildings in the neighborhood.

Located at 91-93 Clemence Street, behind the Wit Building, the Clemence Building underwent exterior and partial interior renovations in 2015. The ground floor and part of the second floor is leased to commercial office tenants. The final interior renovations of this building, which will feature a total of four studio apartments on the 2nd and 3rd floors is taking place now. The apartments in the Clemence Building are expected to start leasing in December.

Earlier this year, Cornish Associates acquired the one-story commercial building at 31 Aborn Street. Repairs to the exterior walls and roof are taking place now. The 3,240 square foot building should be ready to lease in early 2019, suitable for a restaurant or retail tenant.

The architect for the project is Union Studio Architecture & Community Design of Providence who also designed the renovation of the historic Kinsley Building on Westminster Street in 2015. Construction will be lead by Site Specific of Providence.

Additional support for these projects provided by Rebuild RI, BankRI, Providence Revolving Fund, The City of Providence, and The Peregrine Group.